Wanted to share the details about the super secret surprise that has been in the works for quite some time. My hubby & I worked on our twin girls room remodel for their 13th birthday this month.
They have talked, dreamed & wanted to change their room up for awhile now. But as you can imagine with twin girls there were A LOT of ideas, colors & thoughts of what the room should be.  It was just too much!  It got to the point that we were never going to decide on anything to do & the whole project just kept getting pushed back because we {the 2 of them & I} could ever decide on anything.  Then a light bulb moment happened a few months ago when we were in D.C. It was such a game changer that I even wrote about it.

I just decided if we were ever going to change their room I needed a plan!  I recruited the best helper I knew, my hubby, & together we gave ourselves a time limit {their B-Day} certain responsibilities each of us would be in charge of, a theme & went for it.  I'll be honest in my head I thought we could do it all over a weekend & surprise the girls, ahhh- NO!  It was way bigger project than I thought so I'm glad we gave ourselves plenty of time.

I collected quite a few inspirational pics from Instagram to start me on my way.  One of the first things I saw that I KNEW had to be incorporated into the room were these pillows from Hello Apparel.
Hello...... these covers describe my girls exactly!  They've always been this way ever since they were teeny tiny. We have one night owl & one early bird. This was just the beginning point of the room & the first things bought that made me giddy about redoing their room.
I also found some cute black & white star sheets at Target & early on & ordered sheets & the duvet cover from Pottery Barn Kids.  I soon realized I had a theme for the room going on without even knowing it.
-Follow your heart & reach for the stars- 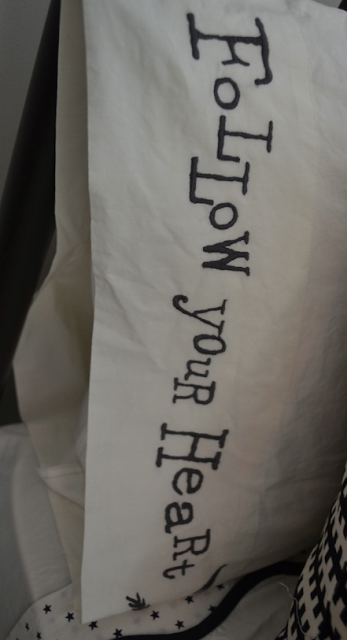 Before I could make up the beds though the first step was paint the room!  Paint & I have a love/hate relationship, which might sound weird since I paint stuff all the time but the thought of getting a gallon of paint to cover a large space just seems to paralyze me for some reason.  The first idea I proposed to my husband he shot down. I wanted to paint the whole room white.  Ceiling, molding, trim, doors everything stark white.  The whole concept I had for the room was a crisp, clean modern space so I thought white was an obvious backdrop & a great blank canvas.  When he didn't buy into it & I know I wanted something very light to compliment the other colors that were going into the room {black, grey, brown, & white} We stopped by the Home Depot, on our way to something else, stood in front of the big wall of samples, looked at a few colors, decided on one & walked out.  I could have NEVER done that on my own. I would have gotten 6 samples, went home to test, think about, look at, think some more before I settled on one.  Nope, not this time we saw Campfire Ash{Behr Brand} liked it & went with it.

After the paint was done we called our awesome friend who just happens to be an electrician & asked for some help installing this light up wooden arrow. He installed it up above the closet, hid the wires & connected it to their closet light switch.  Wa-lah!! Makes for a great low light for the girls & easy to turn off & on.

The girls didn't have bed frames so I knew that was the next big purchase. I looked & looked for ones I wanted & luckily saw a picture of the beds I've been looking for on Instagram & searched Target online & ordered them. 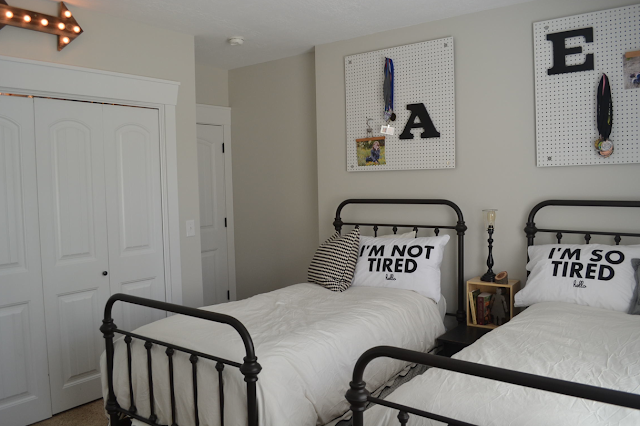 They are called the Tilden Metal Bed.  Love the simplicity, vintage yet modern feel they have.  PERFECT!

The hubby & I then took a trip down to IKEA, because I had a $20 gift card burning a hole in my pocket hmmmm.... that didn't last long {it never does right?} but we got a lot of good stuff.  Both their dressers, photo gallery wall stuff, pillows & a few other accessories. Putting together the beds & dressers was quite a task but one that we enjoyed doing together. Nice to have to do two of everything though because we would take a bit putting together the first one but knock out the second in no time! 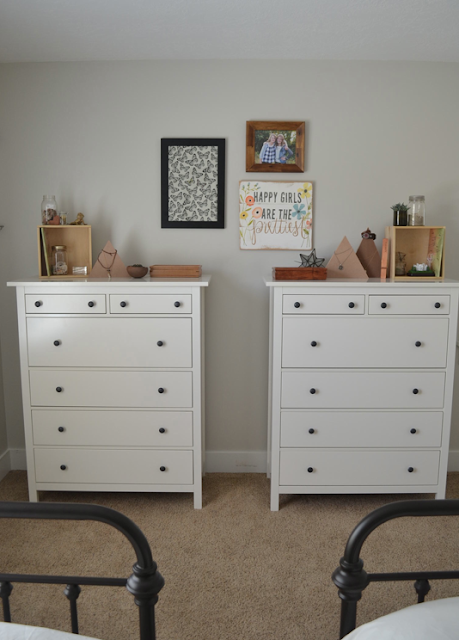 He also cut up some wooden triangles to set on top of the dresser for the girls to use to organize & show off their jewelry.  What a guy!  This was an idea that really inspired me in the Urban Outfitters in D.C. & got the juices flowing on the room redesign project. Easy, clean & simple idea! Just used scraps of wood we already had in the garage. 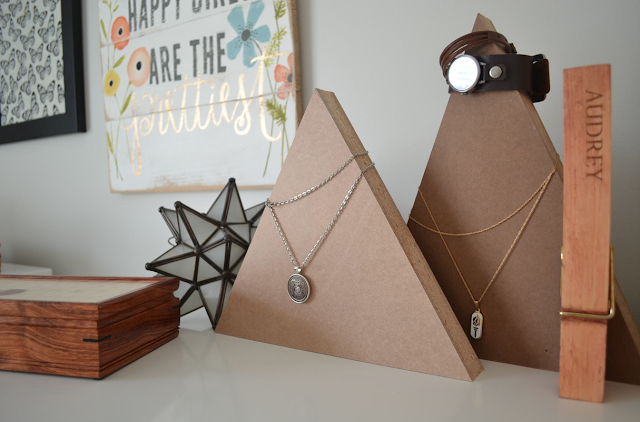 I'm sure the gallery of photos will be filled up in no time. These girls love to take pictures & have fun with family & friends so I'm sure their will be a pic of every fun Summer activity. 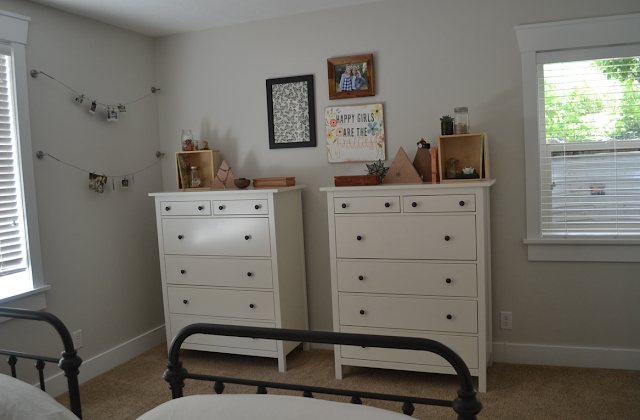 Above the dressers I hung up some butterfly fabric in a frame that we saved from their old room, a darling 8x10 picture of my girls & this beautiful handmade art work from my friend, Jamieson. You can find her on Instagram at @hellpsunshineshop  I love the saying, such a good reminder & I hope one that will great my girls each day as they get ready. 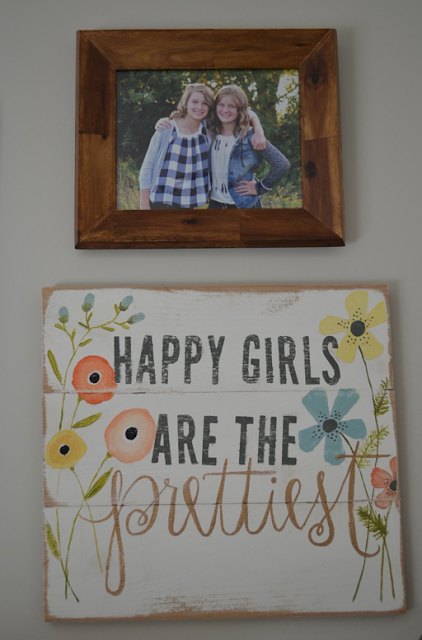 I enjoyed filling up the top of their dressers with this & that & soon learned that one girl is much more of a collector than the other, we need to work on that.  It was a bit of a stretch to find stuff to put on one of their dressers but w did. 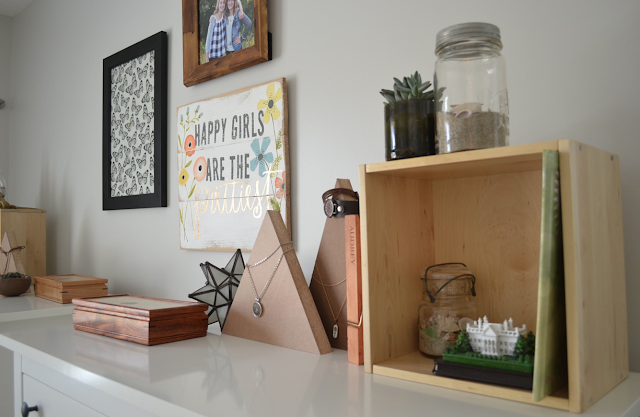 While he was finishing up on a few of the details in the room I wanted to repurpose a few of the items that they had had in their room forever.  I saved the black frames that hung over their beds, A&E red letters & their fun red lamp.  I bought some black spray paint {Which I'll admit have never really used before but oh boy, now I'm a believer!!}  & changed the look of the letters & lamp in no time.  To give the lamp a little bit of an edge, I simply ripped off the lamp shade, just kept the bare bones of it & bought a vintage looking bulb to jazz things up a bit.  Looks really cool if you ask me & was done for little to nothing. 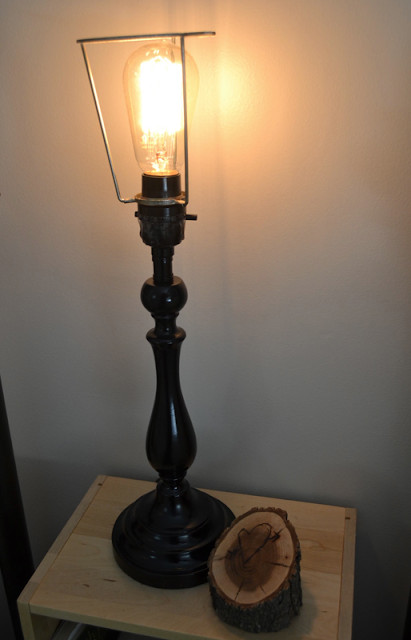 Oops... I almost forgot to mention their awesome display boards above their bed.  They are pegboards that we got from Lowe's that were already painted white, bonus, & had them cut to size at the store.  Brought them home put them up above their beds.

{Be sure to remember to leave space behind the pegboard.  Attach 2 inch boards, to the top & bottom of the pegboard so you can accommodate the peg hooks} 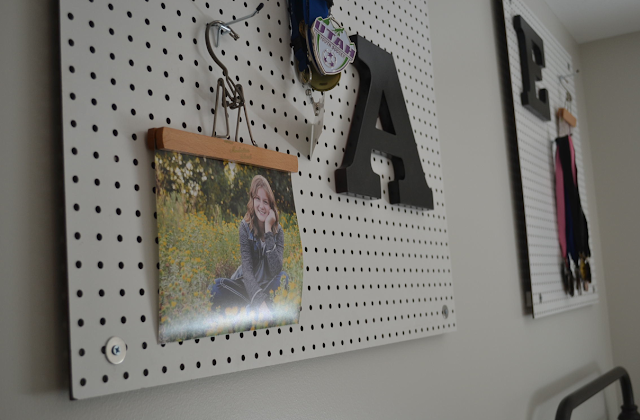 The newly painted letters got put into place using awesome & time saving 3M velcro strips
{If you have not used these before to hang up stuff in your home RUN & get some- life changer!!}
& some peg hooks to hold medals & a vintage wood hanger to show off each girl over her bed.  I bought these hangers from an Instagram shop as well @smokeandsage. 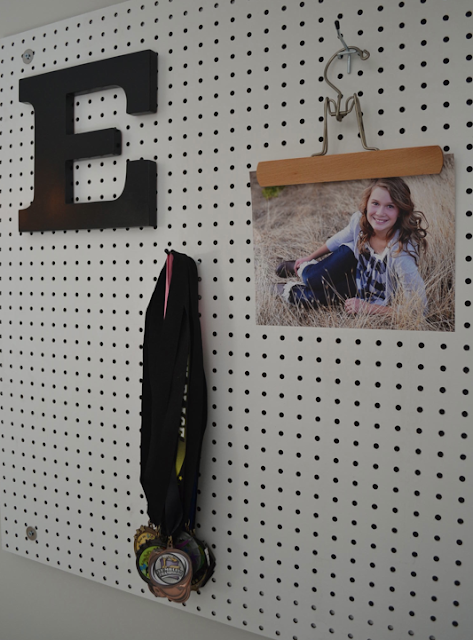 I didn't want to totally fill up this space with stuff right off the bat, I wanted the girls to be able to display & show off what they would like too.  We'll see what makes it's way up there, I'm sure it won't take long.

I hope this will be a happy place for my girls to come relax in, chill out & grow into for the next couple of years.  By the looks on my girls faces when they opened the door on their birthday we accomplished just that. 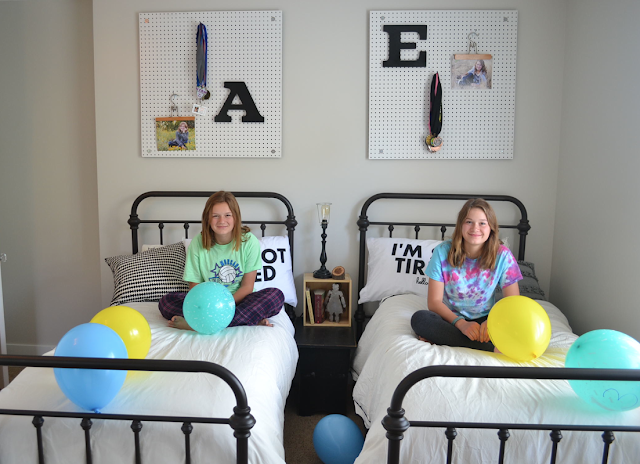 Excited to see what project the hubby & I want to tackle next. We sure had a great time & make a pretty good team if you ask me.

The Shop is open 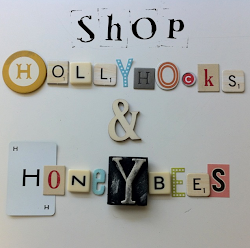 thanks for stopping by! 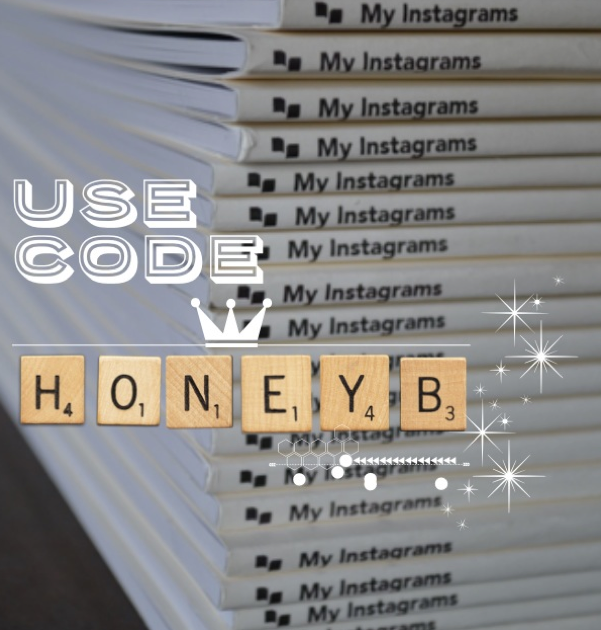 Use this code to get your 1st book FREE!

Honeybee
Thanks to my name meaning Honeybee in Greek & my love for flowers, Hollyhocks & Honeybees {my business} got it's name. I have a charming little studio in my house to create in {blessed} Married to one great guy & Mom to 3 amazing girls.

Can I help you? 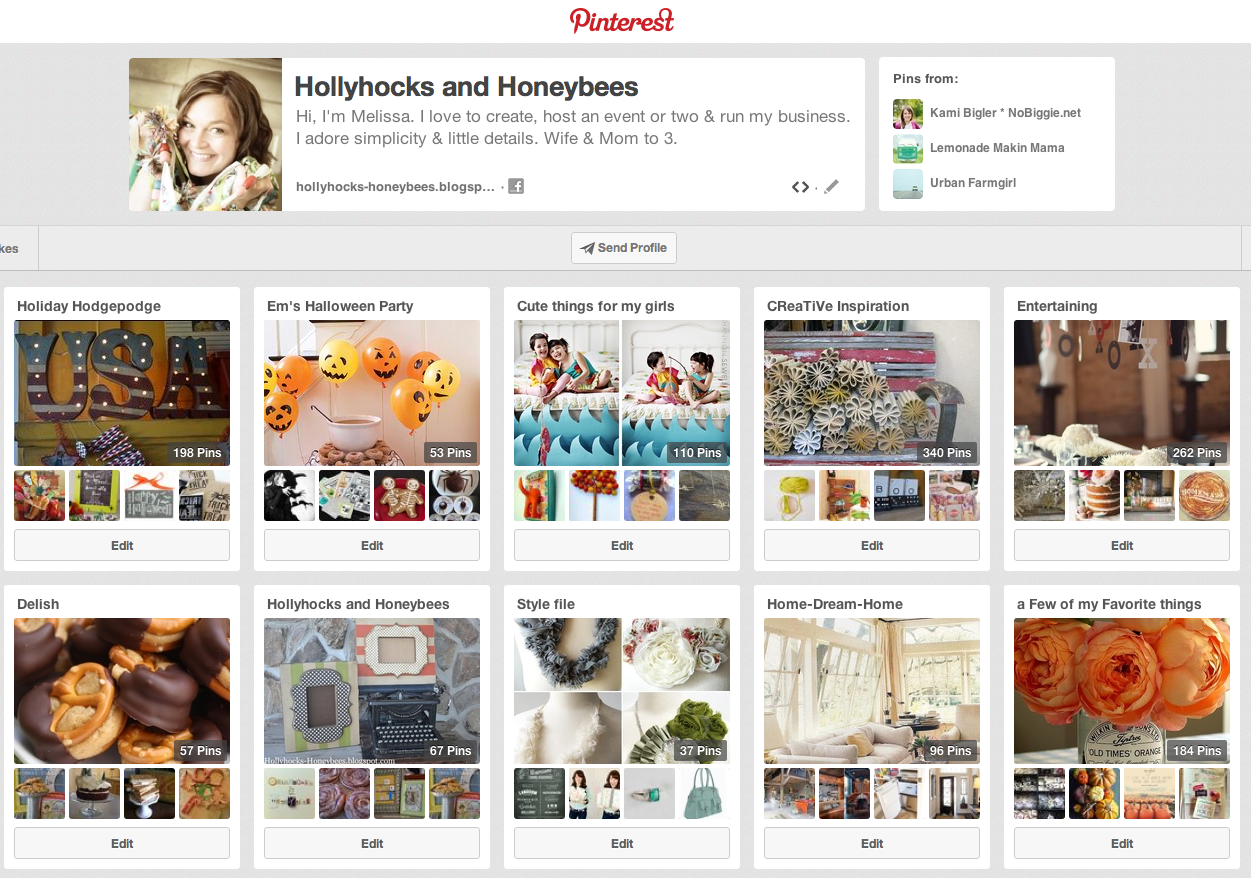